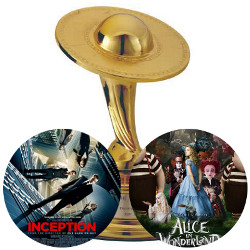 INCEPTION, an incredible science fiction movie took the dominance in Saturn Awards 2011 as it achieved 5 awards from 9 nominations. The movie which is directed by Christopher Nolan was the star during the event.  Some other movies also took lead in some categories.

The categories won include the Best Director and Best Writer for Christopher Nolan. The Best Music category came with Hans Zimmer as the winner. Meanwhile, other awards were won by Chris Carbould, Paul Franklin, Andrew Lockley, and Peter Begg for the Best Special Effects category.

Other movies like Alice in Wonderland, Tron Legacy, Black Swan, and Let Me In won two awards for each. The lead character in Black Swan, Natalie Portman, was honored with Best Actress award for her mind-blowing acting. Another actress who was lucky bringing one award home as Best Supporting Actress was Mila Kunis.

As Best Fantasy Film and Best Costume, Alice Wonderland was the one, whereas the Best Horror Film award was edged out by Let Me In. This last movie had taken Chloe Moretz into podium and he proudly accepted Best Performance for a Younger Actor award.

In Tron Legacy, Jeff Bridges had proven his best shot for he won Best Actor in the event. The movie itself came as the winner for Best Production Design nomination. Here is the list of winners in Saturn Awards 2011 who astonishingly showed their best performance.

A Movie is one of the greatest entertainments has been brought into view and pulls many movie lovers’ attention from the first time it appeared. Movie makers are talented people whose great jobs deserved to be approved.