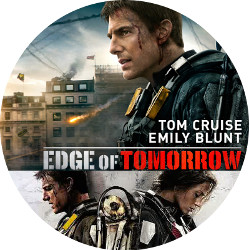 Despite having a prestigious position as one of the leader in the army of US, Cage (Tom Cruise), turns out that has no stock for being involved in a battle field. Since the colonialism field is getting expanded, the power should be used to empower the army.

In the middle of his awkwardness in the battle field, he is forced to use a gun. But, there is a weird incident happened to Cage, after succeeded beating a special alien, alpha, Cage always repeat such an accident since he firstly got the task as a soldier. Cage gets confused and desperate with this weirdness. Then he meets a prime soldier named Rita (Emily Blunt).

Only Rita who understand with what happened to Cage, and she thinks that what capability got by Cage can be used to help people around the world. Cage can stop the colonisation of the alien since years ago which getting more dominating. After that, Cage try to learn from the experience and try to find the weak spot of the alien.

This movie is telling about alien invasion in the earth. It might be such a common story since there are many other movies bring the same theme. But edge of Tomorrow succeeded to take another side of a human who has a special power because of killing a special alien. In the early story, it is told that the character Cage is wondering why he keep repeating the same incident as if he were dreaming.

Based on the quality of the acting, you must not doubt about Tom Cruise. He is really able to go deep into the Cage character. Being a soldier is not a new thing for Cruise. He has ever played such a character in several other movies such as Gun (1986), A Few Good Man (1992) and Valkyrie (2008). The difference is that the battle story faced by Cruise in this movie is more sophisticated. He needs to wear a sophisticated costume in order to balance the alien power.

Overall, Edge of Tomorrow is really offering fresh story with the background about invasion of alien to earth/. How to stop the war which is always repeated? Is he able to do his job properly as a soldier? Find out the answer by watching the movie.