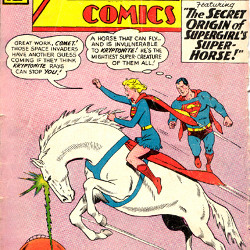 In the short time since it’srecently wrapped up first season began in 2015, the superhero fiction TV series Supergirl has already grown a massive following thanks in part to the heroine’s portrayal by Melissa Benoist. The action adventure television show has also attracted its following because of its unique mix of brightly coloured superheroes, rom-com, and melodrama. A perfect storm of Superhero Chick-Flick! Thanks to this success, fans of the show will be glad to know that Supergirl series 2 has now been confirmed.

With that in mind and in anticipation of the series’ returning to our screens, here are 10 characters we would like to see in the next season of Supergirl the TV series:

In Supergirl, Benoist plays Kara Zor-El, the cousin of Superman and the show follows the heroine on her own superhero journey. The series has seen a range of mash-ups and appearances by other superheroes such as Flash as played by Grant Gustin. It wouldn’t therefore be too much of a stretch to hope we see Green Arrow make an appearance in season 2 of Supergirl.

Krypto the Superdog first appeared in Superman comics while the superhero was still a teenager in Smallville and an appearance on Supergirl 2 would be fitting as the canine would suit supergirl’s cheery earnestness down to a “T”.

Right at the start, in episode one of season one, Supergirl visits her cousin where one of the Legion of Superheroes’ flight rings is on display. Hopefully this was a discreet teaser and the legion makes an appearance in season 2!

Most Supergirl fans agree that the show suffers from a lack of a large roster of formidable villains in a similar way to Superman. The shows producers could take advantage of this lack of memorable baddies by bringing in the goofy prankster Mr. Mxyzptlk, just another character we’d like to see in season 2 of supergirl.

Although season 1 of supergirl has already introduced Kara’s character to us, fans of the show may be surprised to know that there may be other interesting facts about supergirl they may not be aware of. For example, in Braniac 5, the Braniac has a romantic interest in Supergirl, making the villain who later rejects evil and joins the Legion of Superheroes an intriguing character addition for season 2.

As a non-superhero, Kara Zor-El has a strong support system that helps her navigate the challenges in her life, and while she’s had a great relationship with Flash for example, there has yet to be an appearance by an ally that understands her point of view. Step in Mary Marvel, someone who is not only a superhero, but a young woman living as a secret civilian; - a perfect fit for Kara in season 2 of Supergirl.

To make up our list of 10 characters we would like to see in the next season of Supergirl, our fingers are also crossed for appearances by the following:

With a serious lack of any Batman related TV series absent from the horizon, it would be great to reprise the camper side of the Caped Crusader with a look at the restoration of his trusty sidekicks. Plus Batgirl would be a great move to continue speaking to the female audience, going back to the fantastic days of Batman and Robin from the 90’s.

Part of the Teen Titans and would make a perfect Evil Manipulated /Miss Understood character only to become a sidekick for Super Girl. CBS would love it as their younger audiences would recognise and relate to the character from the Young Justice animated series.

With a first appearance in Adventure Comics #293 in 1962, Comet the Superhorse would be a great addition to the Supergirl series. Since the sentient horse (formally a centaur…of course) has similar powers to Supergirl, but isn’t from Krypton, there are plenty of places to insert the horse intot he series and have him pulling Supergirl away from a crippled kryptonite state.

Another graduate of the Young Justice series,Kon-El. Superman’s “cousin” is a clone of Lex Luthor and Clark Kent. With Lex as a father, the possibilities of a violent streak, and kryptonian powers Kon-el could stir up some terrible family drama

As the opening of Supergirl season 2 draws closer, the list above represents the 10 characters we would like to see in the next season of Supergirl the TV series, and hopefully one will make an appearance in the popular show. Better yet, why not all of them, -fingers crossed!